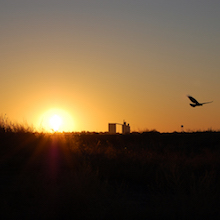 “It was essential that these properties be secured and incorporated into this special public land,” says Eric Held, Manager of Conservation Programs for Ducks Unlimited. “Having all the land within the basin will facilitate future restoration efforts of the wetlands.”

Once fully restored, the Drummond Flats WMA will more closely represent the former landscape consisting of native mixed grass prairie uplands, emergent and permanent wetlands, as well as seasonal moist soil habitat. Historically, the wetland basin provided key stopover habitat complemented by a string of other large-scale wetland complexes stretching throughout the central flyway. The upland areas around the basin also perform important functions as part of the health of the overall habitat.

Since 2006, Oklahoma Department of Wildlife Conservation (ODWC) and its partners have been working to protect Drummond Flats. To date, approximately 5,000 contiguous acres of basin and buffer tracts have been acquired to create a fully protected wetland basin without any inholdings. As part of a lease agreement, ODWC will manage the newest parcels as part of the Drummond Flats WMA, and the land will eventually be transferred to ODWC as funding is available.

“Both Ducks Unlimited and PLJV have had a long and productive history of partnering with ODWC in regard to important wetland projects in Oklahoma,” says Alan Peoples, ODWC Wildlife Division Chief. “We look forward to continuing that partnership as the Drummond Flats restoration project continues.”