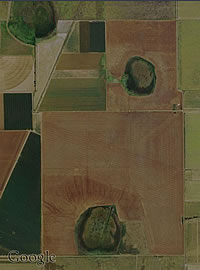 When Jan Minton inherited her great-grandfather’s farm in Floyd County, Texas, she knew she was going to need some help. As a former Natural Resources Conservation Service biologist, she understands that ranching and protecting the natural ecosystem are not mutually exclusive. Wanting to restore the wetlands on the property, she reached out to the D.M Wood Foundation and Playa Lakes Joint Venture, who helped her acquire over $70,000 in funding to begin the much-needed improvements to her family’s farm.

“You guys are my heroes!” says Jan about the partners who helped make the playa restoration possible. “I couldn’t have done it without you.”

According to Jan, the property had been ‘farmed to death’ by the time she took over its management. Over the years, two playas on the 854-acre property were altered to function as tailwater pits that capture and store water that runs off irrigated fields, with a large trench cut through the largest playa to catch and contain drainage water from the upper parts of the watershed. There was also sediment around the larger playa, which needed to be excavated and removed.

In 2007, with help from the Texas Parks and Wildlife Department and the Natural Resources Conservation Service’s Environmental Quality Incentives Program, a 64-acre buffer of native upland grasses and forbs was planted around the smaller playa. Last year, the D.M. Wood Foundation—with funding from the National Fish and Wildlife Foundation and the Texas Parks and Wildlife Department’s Landowner Incentive Program—again helped Janet Minton with her restorations efforts, this time addressing the changes that had been made to the larger 67-acre playa.

In order to restore the playa’s function, the tailwater pit and ditch were leveled, removing four areas of silt, ranging from six inches to two feet. The silt was deposited back in the surrounding cropland outside a new grass buffer. The pit and ditch were leveled using the original soil that had been put in a pile, with the playa topsoil being the last layer restored. In addition, old farm and pumping equipment, utility poles and cement that had accumulated in the basin were removed and disposed of properly.

“When wet, this fully functioning playa will provide waterfowl and shorebird habitat, as well as aquifer recharge,” says PLJV Conservation Delivery Leader Christopher Rustay, “and because of the buffers installed, will continue to do so into the future.”

The buffer surrounding the smaller playa is now well-established and preventing sediment from reaching the playa. It has also increased the number of wildlife in the area, including pheasant and deer.

“Both restoration projects will help increase playa hydrology, which will improve the wetland plant community and provide more forage for migrating birds,” says Rustay, “although, with current rainfall patterns and drought, it could be several years before we see the full effects of the latest project.”

“Empowering ranchers to protect our natural resources in a way that it is helpful to their operation is core to our mission at the D.M. Wood Foundation,” says Executive Director Laura Wood. “Working with dedicated landowners like Jan Minton is a great privilege.”