Native grasslands, wetlands, rivers and streams provide habitat for many continentally important populations of waterfowl, shorebirds, waterbirds and grassland birds. However, these habitats have been lost to the point where native wildlife dependent upon them has declined in population, including Mountain Plovers, Lesser Prairie-Chickens and Northern Pintails. 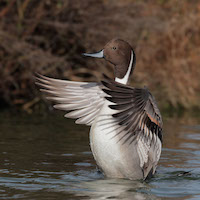 Playa lakes may be the most important wetland habitat type for waterfowl in the region, hosting about 20 species of waterfowl during wintering and migrating seasons. These birds include ducks, such as Blue-winged Teal, Mallards and Northern Pintails. Playa vegetation is especially nutritious for wintering ducks and if there is water they provide essential roosting areas. Canada, Greater White-fronted, and Snow Geese also migrate and winter in the playa lakes region in relatively large numbers. Numbers of wintering waterfowl vary depending on climatic conditions, especially rainfall. Additional issues for waterfowl in the Playa Lakes Joint Venture (PLJV) area include loss of nesting cover, wetland loss and modification, environmental contaminants, predation and disease. Wetland conservation programs such as the USDA’s Wetlands Reserve Easements, Farmable Wetlands Program and Wetlands Restoration Non-Floodplain Initiative are helping landowners conserve playas by offering farmers incentives and cost-share to restore and buffer the wetlands. 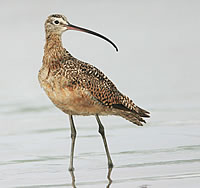 The PLJV region is located in what may be the most important inland migratory corridor on the continent for many shorebirds. The majority of shorebirds stop at wetlands during migration. Some shorebird species such as the Long-billed Curlew and Snowy Plover nest in the playa lakes region. Many conservation issues affect this diverse group, and shorebird use of the region is largely under-studied. As with waterfowl, shorebirds are negatively impacted by unpredictable, unavailable and poorly-timed water supply. Even when water is available at the right time, human recreational activity can interfere with birds’ use of wetlands. Several major wetland areas in the PLJV region important to continental populations of shorebirds — such as Cheyenne Bottoms Wildlife Area, Jamestown Wildlife Area, and McPherson Valley Wetlands in Kansas and Hackberry Flat Wildlife Management Area in Oklahoma — have been protected through the North American Wetlands Conservation Act. These wetlands support many migrant shorebirds including the Piping Plover, American Avocet, Hudsonian Godwit, Baird’s Sandpiper and Long-billed Dowitcher. 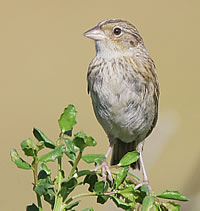 Landbirds use the entire suite of habitats found in the PLJV region. Grasslands support a variety of birds including Grasshopper Sparrow, Cassin’s Sparrow, Lark Bunting, Dickcissel, McCown’s Longspur, Burrowing Owl and Ferruginous Hawk. Shrublands provide habitat for one species of bird found nowhere else in the world — the Lesser Prairie-Chicken — as well as more common species such as Scissor-tailed Flycatcher. Often playa watersheds are important for producing prey for raptors such as the Northern Harrier, Peregrine Falcon and Short-eared Owl. Baltimore Oriole and Lewis’s Woodpecker both use riparian woodlands. These species generally suffer from loss of habitat, specifically loss of food resources and in some cases nesting locations. Additionally, in some areas of the PLJV, persecution by humans is still a problem. Upland game birds such as the Greater and Lesser Prairie-Chicken, Ring-necked Pheasant, Scaled Quail and Northern Bobwhite Quail have experienced regional declines due to loss, degradation and fragmentation of habitat. In the PLJV region, the USDA Conservation Reserve Program, which pays farmers to restore cropland back to native prairie, is major influence on the conservation of prairie birds. 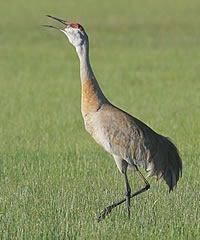 Waterbirds form a diverse group of birds — from graceful egrets to powerful pelicans. They use wetlands in a variety of ways. For example, the endangered Interior Least Tern nests on sandbars along prairie river systems. These birds use a variety of habitats that are usually maintained by water, which makes this group highly dependent on human manipulation of water in rivers, reservoirs and wetlands. These birds also benefit from the wetland conservation programs mentioned above as well as riparian restoration efforts. Waterbirds of conservation concern include the Eared and Western Grebe, American White Pelican, Sandhill Crane, Whooping Crane, Franklin’s Gull and Forster’s and Black Tern. Priority marshbirds include the American Bittern and Black Rail. Impacts on marsh birds are similar to waterfowl with the addition that marshbirds are largely very difficult to monitor. This makes determining their status and distribution difficult and relegates marshbirds to the least known group in the PLJV. Still, these birds benefit from the variety of wetland, riparian and grassland conservation projects taking place across the region.