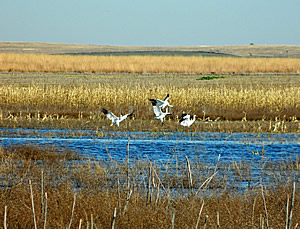 The PLJV ConocoPhillips grant program has supported habitat conservation for nearly 25 years, investing over $2.2 million into more than 260 projects around the PLJV region, with most of those projects providing habitat through traditional restoration or protection activities. Although ConocoPhillips grants are relatively small, $25,000 or less, they can provide greater value when used strategically within a broader plan.

Take a look at Kansas Department of Wildlife, Parks and Tourism (KDWPT), for example. Rob Unruh, manager of the Jamestown Wildlife Area, has applied for three PLJV ConocoPhillips grants to help fund discrete projects within Jamestown — and received funding each time. He has also been successful in leveraging those funds by using it as non-federal match for North American Wetland Conservation Act (NAWCA) grants.

Unruh explains what prompted him to be more strategic in his grant applications. “Joe Kramer, our division director and long-time PLJV board member, challenged us to propose projects for the ConocoPhillips grant program. At Jamestown, we committed a large portion of our revenues from agricultural leases as match, as well as some revenue from the sale of the state waterfowl stamp. With the support of my supervisors Brad Simpson and Mike Nyhoff and hard work from my assistant manager Matt Farmer, we were able to create some really neat wetland habitats that also worked on some of the PLJV’s goals. A side benefit was that these projects could also be used as match for two of our successful NAWCA grants. The Pintail Marsh Project was recently submitted as match with our third standard NAWCA grant application.”

KDWPT received a 2014 PLJV ConocoPhillips grant for improvements to Pintail Marsh. The project will enhance a 120-acre cropland field by converting and restoring 58 acres into an emergent marsh by installing earthen berms with water control structures to be managed as a moist soil unit. The project is the southern terminus of a complex of managed wetland and upland habitat, which provides habitat utilized by a diverse population of bird and wildlife species. In 2012, KDWPT received a grant to enhance 237 acres of emergent marsh wetlands at Jamestown Wildlife Area to allow the best foraging habitat for migrating shorebirds, teal, pintails and cranes. Pump stations and pipeline were built to move water from the existing Marsh Creek to create mudflats and shallow water areas at Buffalo Creek. The project built on the previous Buffalo Creek Marsh project, completed with a 2008 PLJV ConocoPhillips grant, which restored 197 acres of emergent marsh wetlands in two pools along Buffalo Creek. Low levees and water control structures helped restore cropland to shallow emergent wetlands.

According to Christopher Rustay, PLJV Conservation Delivery Leader and grant program manager, using ConocoPhillips grants to leverage additional funds requires a long-term approach to wetlands conservation and restoration. “Having a long-term strategy for wetland conservation, helps with planning — when to apply for grants, how to find match from other sources, etc. — and allows for contingencies. For example, one can apply for a ConocoPhillips grant one year and then leverage those funds to match NAWCA proposals in subsequent years.”