Tips From a Successful Applicant 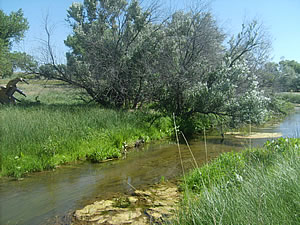 The NAWCA small grant funds the removal of Russian-olive trees, like the one pictured overhanging the South Fork of the Republican River in Yuma County, Colorado. Photo courtesy of Fred Raish, Yuma County Pest Control District.

Applying for a North American Wetland Conservation Act (NAWCA) grant may seem daunting, but preparing a proposal for the small grant program may be easier than you think. We recently talked to Noe Marymor, from the Bird Conservancy of the Rockies, to get some tips on writing a successful proposal. She is a private lands wildlife biologist who works with the Natural Resources Conservation Service and Colorado Parks and Wildlife to deliver habitat conservation projects through Farm Bill funding sources in northeast Colorado and recently helped develop a NAWCA proposal that was awarded $75,000. The funds will help remove invasive Russian olive trees along the Republican River in Yuma and Kit Carson counties in northeastern Colorado.

“This was the first time I wrote a proposal for the NAWCA small grant program,” says Marymor. “My advice is to start the process early, and develop some patience, but it is well worth the effort.”

For first-time grant writers, understanding the background of this grant program and how it fits into the North American Waterfowl Management Plan (NAWMP) can be helpful. The plan, which seeks to increase duck population levels on the continent, recognizes that providing wetland habitat is key to sustaining waterfowl populations. NAWCA grants, both small and large, provide funding for long-term wetlands conservation projects. Since NAWCA grants are ultimately designed to help sustain wetland bird populations, projects should be designed with that in mind and proposals tailored to fit that goal.

The riparian project has been ongoing since 2007, so many of the pieces were already in place when they decided to apply for a grant, but timing was key according to Marymor. “It was very timely and fortuitous that we were at the point of the project which coincided with some major waterfowl goals. With the draining of Bonny reservoir, a major reservoir in eastern Colorado, we lost a bunch of wintering waterfowl habitat. It just went away over the course of one summer. At the time that was happening, we had begun to focus more on riparian restoration along the south fork of the Republican River adjacent to the reservoir. That work is opening new parts of the river for waterfowl roosting and helping to offset some of the wintering habitat loss from the draining of the reservoir.”

Once you have a project idea, you’ll need to consider how to get it accomplished, which requires looking at two money issues: 1) how much the entire project will cost, and 2) how much non-federal cash and volunteer services will be contributed by the partners involved (match).

“Fortunately, since this is a large ongoing project, we had a lot of partner involvement,” says Marymor, “including non-federal match from US Fish and Wildlife Service, Colorado Parks and Wildlife and Yuma County Pest Control District. It definitely helps to go over the application guidelines with a very fine tooth comb to determine what constitutes match and how you can use it. There are so many ways to figure the match; there’s more flexibility but also more rules you have to pay attention to.”

When looking at match, there are several things to be aware of.

When the budget is determined you are off and running. The proposal itself requires only four pages of written material. This includes describing the project and partners, and answering questions about the project’s value to wetlands and wetland dependent species.

“We worked with Christopher Rustay, at Playa Lakes Joint Venture (PLJV), and Brian Sullivan, at Colorado Parks and Wildlife, to get some of the waterfowl information we needed to write the grant proposal and to figure out how to make it as strong as possible. Christopher gave us ideas on how we might try to address some of the application questions and also did a final review of the proposal before we submitted it.”

PLJV can provide support with many aspects of proposal development—including discussing project ideas, directing applicants to planning information and helping to determine the value of the project to birds in the area—so we recommend having a conversation with our Conservation Delivery staff early in the process.

“It is really important to work with the Joint Venture,” noted Marymor. “Christopher was invaluable. The first time we submitted our application, we didn’t get funded. But Christopher came back to us and recommended we try again. We were a bit burnt out from the first attempt and not too motivated to try again. He really encouraged us to update the proposal and give it one more try; and this time the project was funded. I really appreciate Christopher being involved in the process and the support that PLJV provided.”

When asked what she would have done differently, Marymor said she would have given herself more time. “We really started working on the proposal four to five weeks before the deadline; I wish we had started a couple months earlier. It is a detailed application, so it takes time to go through and build all the budget spreadsheets. Then there is chasing down partners to get letters of support. That can take a couple weeks of making phone calls and hunting people down.”

So be sure to plan enough time to gather supporting materials and write, review, edit and submit your proposal through grants.gov. Also, remember that PLJV is here to help support your project. Please talk to us and your other partners throughout the development process.

For questions on anything NAWCA related, please contact Christopher Rustay at christopher.rustay@pljv.org.