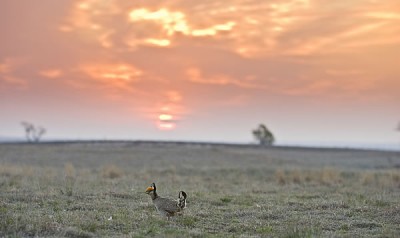 Programs like the Conservation Reserve Program (CRP) provide important habitat for Lesser Prairie-Chicken; that is widely recognized by land managers across the region. However, few scientific studies have documented the importance of CRP to maintaining this species. In addition, those involved in habitat conservation efforts also often invoke the need for “large blocks of habitat” to support Lesser Prairie-Chicken, but there is relatively little information in the scientific literature to provide guidance on the size of area that is important to this bird.

To answer some of these questions, Playa Lakes Joint Venture (PLJV) recently completed a Conservation Effects Assessment Project for the Natural Resources Conservation Service (NRCS) that evaluated the relative importance of native grassland and Farm Bill programs to Lesser Prairie-Chicken populations. As part of the project, PLJV staff evaluated the number of acres of native grassland, as well as acres enrolled in the Conservation Reserve Program and Environmental Quality Incentives Program, against lek data at various spatial scales across the range of the bird.

“This information is useful for understanding the appropriate spatial scale at which conservation efforts will be most important,” says Anne Bartuszevige, PLJV conservation science director.

“We found that EQIP was related to Lesser Prairie-Chicken lek presence at some spatial scales, but were unable to draw firm conclusions,” says Bartuszevige. “However, this was a preliminary analysis and more investigation is warranted.”

The amount of grassland or CRP may not be the only factor important to Lesser Prairie-Chicken presence; how that habitat is configured (e.g., large patches or several small, fragmented patches) may be important as well. Preliminary analyses of landscape structure indicate that a combination of composition (grassland) and configuration (patch size and continuity) are important for Lesser Prairie-Chicken conservation.