Within the PLJV region, playas provide a majority of the wetland habitat acres that waterfowl and shorebirds depend upon. Since playas are mostly found on privately-owned lands, most of our work to restore playas is in collaboration with landowners and producers. 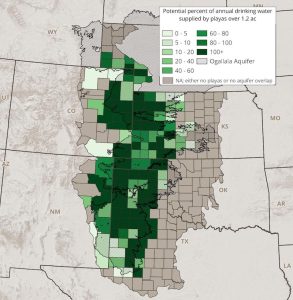 Counties over the Ogallala aquifer and percent of drinking water needs that could be met through playa restoration. Data sources: US Census, Kansas Geological Survey, PLJV, and ESRI. Click to enlarge.

Across the region, as water supplies are declining, we’ve found the rate of playa conservation increases when we collaborate with landowners and communities to provide a sustainable water source with playa restoration as part of the solution. Therefore, our playa goal is stated as the number of playa acres needed to provide drinking water for the people in counties over the aquifer (see map).

While the amount of potential recharge through playas varies for each county — based on number of playas over the aquifer, population, and other factors —we are challenging ourselves to restore enough playas to provide 50% of drinking water needs, when possible. If we achieve this goal, these playas will provide enough habitat to support approximately 20% of our waterfowl objectives and 8% of our shorebird objectives, as well as about 12% of our goal to recover grassland songbirds through the Conservation Reserve Program by establishing grass buffers around the playas.

Learn more about our playa and other habitat goals in the PLJV Implementation Plan.

Because the playa landscape is continually changing, we have factored in the projected loss of healthy playas from sediment accumulation, which ranges from a low of 1.2% loss in New Mexico to a high of 2% loss in Nebraska, when determining our annual playa restoration goals.

How We Are Restoring Playas

In the stories below, you’ll see a few of the ways the PLJV partnership is implementing playa restoration strategies to meet our goals — from applying social science results in the design of new conservation programs for landowners to working with communities on sustainable water plans. While no one strategy will meet our goals, all of the individual efforts do add up and make a difference. To learn more about the partnership’s conservation strategies, read about our Implementation Plan and view the strategies tables.

This innovative USDA Conservation Reserve Program State Acres for Wildlife Enhancement (SAFE) practice lets landowners in Nebraska and Kansas submit an offer for the annual payment amount received to remove playas from production, restore them, and plant a native grass buffer around them.

The Migratory Birds SAFE, which was first announced in January 2017, was designed after PLJV held focus groups with landowners to listen to their considerations and concerns about managing playas within their operations. During the first two rounds, over 36,000 acres of playas and surrounding vegetative buffers were offered with nearly 13,000 acres accepted into the program. We estimate that at least 2,600 of those enrolled acres are playas, assuming a 4:1 buffer size; however, the actual number of playa acres is probably higher since not all offers included the maximum number of buffer acres allowed.

“The success of the first two signups for this SAFE, particularly in light of the relative absence of CRP-restored playas beforehand, has shown that not only can a reverse auction be successfully implemented beyond general signup, but also that it has the potential to increase the conservation bang per taxpayer dollar spent,” said Rich Iovanna, an agricultural economist for USDA Farm Service Agency who has been involved in the development of the Migratory Birds SAFE.

The Migratory Birds SAFE is a model for how CRP can be tailored to meet the needs of both wildlife and landowners. More acres have since been allocated for the program in Kansas and Nebraska, and the partnership is working on expanding it to other states in the PLJV region.

The PLJV partnership is working with rural communities in New Mexico and Kansas to incorporate playa conservation into municipal water sustainability plans and export this conservation model across our region through the Tomorrow’s Water initiative.

In 2018, PLJV formed a partnership with the City of Clovis, New Mexico, based on a shared interest in creating a sustainable water supply — for people and birds. Playa conservation and restoration was included in the city’s water assurance plan, and PLJV received a Resilient Communities grant from the National Fish and Wildlife Foundation to start restoring playas. Since then, the effort has grown tremendously, with additional partners engaged and more than $1 million in funding available to conserve and restore playas. As of March 2022, over 468 playa acres have been restored or have restoration projects under development, as well as 134 acres of planted grass buffers and approximately 1,150 acres of vegetative buffers already surrounding these playas.

In Kansas, PLJV partners including county conservation districts, groundwater management districts, and the Natural Resources Conservation Service collaborated on a $3 million project to support groundwater recharge and sustainability in Wichita and Greeley counties. Playa restoration work is also being funded through a $250,000 grant from the Wildlife Conservation Society’s Climate Adaptation Fund to support resilient communities.

Focusing on the need for abundant, clean drinking water has allowed us to make new allies for conservation. This model continues to be exported and adapted to other communities within Kansas and other states including Texas. By showing that restored playas contribute to water sustainability goals, we are able to engage people in playa conservation much more than ever before — which delivers critical wetland habitat for many bird species.

With about 23,000 playas in the Southern High Plains of Texas, the state is undoubtedly an important place for playa restoration and conservation. But, despite their abundance and ability to support aquifer recharge, they often go unnoticed or underappreciated.

Since 2015, Texas Parks and Wildlife Department (TPWD) and other partners have been working with producers and landowners to restore playas in the Texas panhandle through the Texas Playa Conservation Initiative. Playa restoration is completed at no cost to the landowner and a one-time incentive payment is provided.

“Of course habitat conservation is important and the reason why we do this, but I also think the community of partners — working together and getting people familiar with this type of approach in this landscape — is also important,” said Jeff Raasch, joint venture program leader for Texas Parks and Wildlife. “It’s all of us learning together how to do it.”