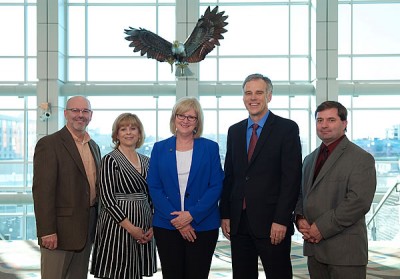 On March 11, Playa Lakes and Rainwater Basin Joint Ventures received the 2015 Wings Across the Americas Award for habitat conservation partnerships during the North American Wildlife and Natural Resource Conference in Omaha, Nebraska. The national award, given by the U.S. Forest Service, recognizes a partner whose work benefits a species or group of species through significant habitat improvements.

“This was an especially fun award,” says PLJV Coordinator Mike Carter, “because we received it with Rainwater Basin Joint Venture with whom we work on an almost a daily basis.”

The Joint Ventures were nominated by Jeff S. Abegglen, U.S. Forest Service’s Acting Regional Wildlife Program Leader for the Rocky Mountain Region, who highlighted the partnership’s use of Geographic Information Systems and decision support tools to strategically plan and implement conservation projects and monitor their outcomes. He also noted how PLJV recently a grant for nearly $150,000 that will be leveraged to over $300,000 to restore 20 playa watersheds on national grasslands.

“This award stems from the commitment of our partners, which include conservation agencies and organizations as well as individual agricultural producers and landowners,” says Andy Bishop, Rainwater Basin Joint Venture Coordinator. “Their dedication is what makes this partnership work.”