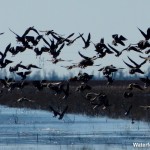 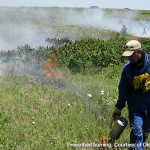 The Roger Mills Prescribed Burn Association formed in 2006 and covers Roger Mills and Beckam counties. The group addresses the four common reasons people do not use prescribed fire: liability, training/experience, labor and equipment.

The Comanche Pool Prairie Resource Foundation is a regional grazing group located in south-central Kansas and north-central Oklahoma on 5.4 million acres of mixed-grass and sand-sage prairies. The group works with ranchers in its area to educate how best to manage grasslands to produce wildlife, clean air and water, as well as income from livestock grazing.

This partnership — consisting of agencies, non-governmental organizations and landowners — is working to control invasive plants along the banks of the Canadian River in the Texas panhandle and western Oklahoma. Saltcedar, eastern redcedar and Russian olive trees are being controlled if not eradicated.

The mission of the Sandhills Task Force is to partner with ranchers in north-central Nebraska to “identify, prioritize, plan and implement projects that benefit private ranching, wildlife and vegetative diversity and associated water supplies.” Besides ranchers, members include representatives of local communities, groups, organizations and state and federal agencies.

The mission of the Three Rivers Alliance is to sustain vibrant natural and human communities of the Republican River Basin by promoting good stewardship of its land, water and wildlife. The group addresses three aspects of long-term landscape sustainability: economics, education and conservation.